Another spectacular start to the day at Austinmer rock pools. Picture: Kirk Gilmour

For some, swimming in the Austinmer pools is a solo pursuit, a morning meditation between yourself, the water, and the stream of bubbles flowing from your mouth.

For others, it's a social affair, marked by idle conversations outside the change sheds, or long sessions sitting in groups as you might find at a resort.

You'll see quite a scene there in the morning, as dozens of locals take advantage of the fresh morning sun and the crisp clear water.

Many gather around the chalkboard maintained by daily swimmer Brian Cummins, listing the temperature and a quiz question each day.

One morning this week the conversation at the pools was centred on the pools themselves, and the proposal of Wollongong City Council's citizens panel that some pools be abandoned to save on maintenance, while rates might rise.

We already pay enough in rates to not have our pool threatened, was the consensus. An open discussion of on-water matters.

The morning is rush hour at Austinmer, as the early morning swimmers act out a ritual that must add years of time, or at least happiness, to a life.

For me, Austinmer has the crispest water of all the rock pools, fed as it is by waves crashing over the eastern edge when the tide is up, then washed through in a thick liquid slab flowing over the other end.

Some days, when the tide is right, you need to be careful you don't go with it.

Austinmer’s twin pools are filled by ocean waves and are popular with residents and visitors. Picture: Christopher Chan

As the day goes on, the pool population returns to normal, and more kids arrive in the northern, shallower pool.

Busloads of Chinese tourists alight for a quick stop, barely long enough to marvel at the beach and take some photos, the braver ones dipping a foot in the pool.

Any locals who forget how lucky they are need only speak to one of these travellers and hear how wonderful it is to see the blue sky, unpolluted.

Pick a public holiday or a sunny summer day, and the population of the beach swells to the point it's hard to find a place to park a car, or a spare bit of grass among the maxi tents. 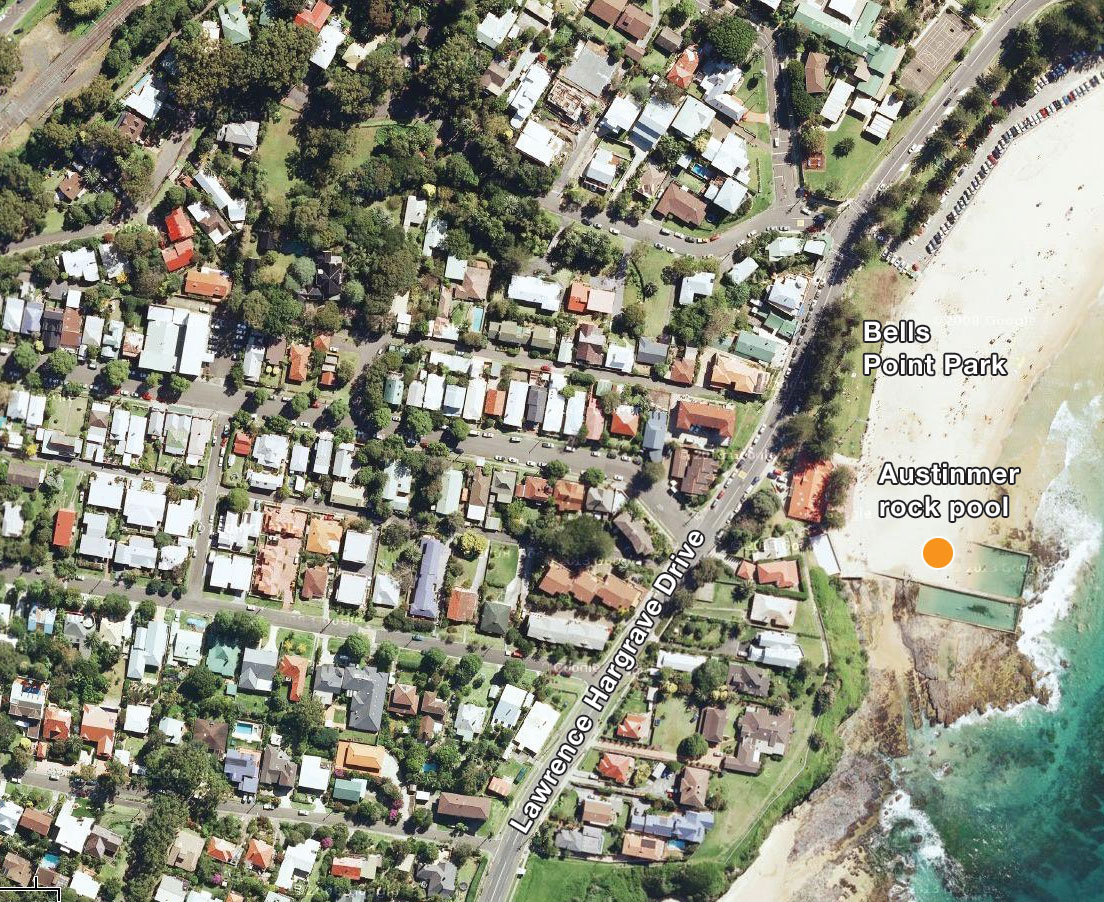 The demographics change through the day, too - many of the day trippers are extended families from the super-diverse suburbs of western Sydney, while by night Austinmer is largely Anglo-Saxon.

Some of the visitors are clothed from head to toe, religion the reason, or else it's because they don't plan on going near the water.

The older Aussie blokes are covering up too, the prevalence of rash shirts perhaps a testament to the damage skin cancer has wrought on families.

Seeking information on our historic pools

A supplied photo by Ian Foreman of Austinmer Beach before the two main pools were constructed into the rock platform.

Definitive information on the history of our rock pools can be hard to come by, as they were constructed by a variety of people, sometimes before Wollongong City Council included their suburb.

The best estimates at this point would be that the ‘‘babies’ pool’’ at Austinmer was opened in 1914, the northern (shallower) pool was built in the 1920s, and the longer southern pool was added in the late 1930s or early 1940s.

Information from Wollongong City Council suggests the northern pool was built in the late 1920s, spearheaded by Bulli Shire Councillor Clowes, after whom Clowes Park is named.

The work is believed to have been carried out by Bulli Shire Council and contractors. The babies’ pool is still a haven for families of young children, while the deeper, longer pool is popular for lap-swimmers.

Some local amateur historians are working on putting together a more accurate history of the beach, using the minutes of the Austinmer Progress Association and surf club, as well as many old photos, to piece together the chronology.

The task would be easier, however, if all photographs had dates written on the back.

We do know that there was a measure of controversy in 2002, when a new public liability insurer meant Wollongong City Council had to install handrails at the eastern end of the pools to prevent people being washed out. Some locals made their point by cutting down the new railing and tossing it into the sea. It has since been replaced, and gives youngsters something to hold on to while the waves crash over them.

Significant works are once more on the agenda at Austinmer, with Wollongong City Council telling the Illawarra Mercury it plans to spend $350,000 from the current budget on designing and constructing a new wall at the pool.

The eastern end of the longer pool has a leak, but the works being considered may have more to them than simply plugging the hole.

If anyone can help the council better understand the history of our ocean pools, they are encouraged to call 42277414, email localhistory@wollongong .nsw.gov.au or visit the Local Studies section of the city library on Burelli Street.

Read more stories from this series

Discuss "Exhilaration is a swim in Austinmer ocean pool"